“The lion’s cub is a lion, male or female”: protecting homeland with a gun in hands and red lipstick on 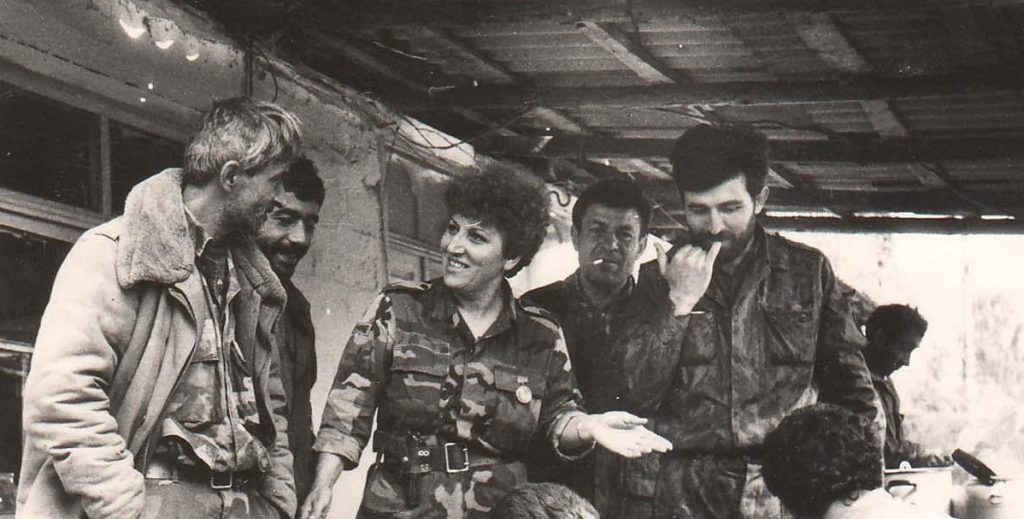 28 years ago, in 1992 when the war began in Artsakh Aida Serobyan, 36 was working in a polyclinic. Getting home from work one day, she watches an emergency broadcast, where it is being announced that medical personnel are needed in Artsakh.

The very next morning, Aida goes to the Ministry of Health and asks them to send her to Artsakh instead of going to work as usual. Knowing that her family will be shocked and, maybe, against her decision, she decided not to tell them about it. She tells her mom that she has been sent to work in one of the health centers in the spa town of Jermuk. Showing the soldiers first medical aid, pretty much this is how she becomes the “dokhtur” (doctor) of the battlefield.

28 years later in 2020, history repeats itself. Only this time, Aida is already a Colonel, she is well-experienced and already well-known by so many.

“It’s the matter of Armenians’ existence this time, so we need to go till the very end,” Aida said. The Colonel, who saw so many deaths, so much blood, pain, and frustration, has interestingly never lost her female power and elegance.

Since the situation escalated and became extremely tense between Azerbaijan, Artsakh and Armenia, Aida has taken the road to te the battlefield from the first day. Red lipstick and the smile are on even on the battlefield. Female power needs to stay nourished- even during the times of the war.

“I like how she talked about the war with such a calm voice, always keeping the positive and strong energy in it”, recalls one of Aida’s students, Narine, “She never whined about the war or cried while telling something. I think Artsakh and the war have “rewarded” her with such strength and cold-heartedness (in a good sense)”.

Narine confesses Aida’s lessons were the most interesting ones in the college, as everything she told was based on true life experience, which is always better than any theoretical material.

Anna, another student of Colonel Aida, is sure that what Aida teaches the younger generation is very important. “She teaches them to love their homeland and defend it when needed. With her example, she always showed that those aren’t just words to shout. One needs to prove the love with actions”, Anna says.

Anna believes that for a very long time the younger generation was used to thinking that wars only happen in movies, but what happened in October, showed that it’s all more than real.

“Now we really get what this is all about because we already feel it on our skin. So many boys from our college went to the battlefield and I guess some of them had got their courage from Colonel Aida’s lessons. There’s one saying, which is exactly describing Aida’s story: “The lion’s cub is a lion, male or female”, she says, recalling her lecturer.

PrevPreviousWE WANT PEACE.
How to Support Artsakh.
Next‘People will have new biocybernetic capabilities with quantum calculations, caring less for their comfort and physical needs’ Nadiia Vasylieva, DNA board memberNext